[1] The first answer to the question „Is there a European History?“ is „There is a variety and different histories of Europe.“ There is not one single, Europe’s objective narrative or displayable history.

[2] The books that tell European history, even when it comes to a European collective of authors, are characterized by concrete narrative cultures. One can find there prevailing elements of the English, French, German, Italian or any other national way of telling European history.

[3] This does not seem to change, so you have to visualize and critically analyze these different ways of telling European history. This could be a small addition to the current exhibition concept.

[4] With the House of European History an attempt was made to tell European history in fact European, that is, to avoid the trap of national cultures of historical narration. This has succeeded, but this method also has its price: The themes chosen for the permanent exhibition are conventional.

[5] Nevertheless, this can lead to debates, because in the end, the objects on display appeal to everyone differently. In addition, the permanent exhibition is complemented by other special temporary exhibitions, which make special perspectives strong.

[6] This is an interesting opportunity. The Europeans, who are interested in the history of their continent, are invited in this way to look not only once at an exhibition, but always to look at the history of Europe from another perspective. This is a bit like the principle of lifelong learning.

[7] However, since not everyone can come to Brussels and not all of them again and again, it would be necessary to digitally make the special exhibitions available at the end as a virtual tour, so that the concept of lifelong learning in European history works.

[8] The plurality of entrances to the history of Europe must include counteracting familiar narratives. As a rule, the point of view from which the history of Europe is told is Eurocentric. The inclusion of globalization does not change that much. The narrative changes only when the narrative itself is global historical. In other words, Europe must be seen as part of global developments, and not in a Eurocentric way.

[9] What „global developments“ are depends on the epoch, but this perspective is already fruitful for antiquity.

[11] In my opinion, the mistake lies in the fact that the history of integration was not sufficiently cultural history. It was and is a historico-political, historical-institutional, legal and economic discipline, but not cultural-historical. Obviously, however, a lot went wrong in the development of European post-war culture, so today – in 2018 – in more and more European countries, despisers set the tone.

[12] To the exhibition of the European history of the time since 1945 must therefore be added a critical cultural-historical chapter, which should be added as a counterweight to the part of the exhibition, which picks out as a central theme the consumer and affluent society of the post-war period.

[13] The variety of possible narratives includes the individual level. Over the last ten to twenty years, the term „my Europe“ has become established as a label. Of course „My Europe“ can also be found as a hashtag on Twitter, but for a long time there are individual essays, essay collections, autobiographical books, a weblog, etc. under this label. 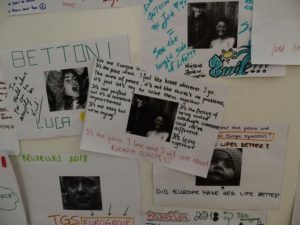 [14] These very personal approaches, which refer to the Europe since 1945 and especially to the last 2 to 3 decades, are very suitable for an exhibition very well. This could be the last issue chapter, because at the very end the visitors can already leave individual statements which, to some extent, continue the idea of “my Europe”.

Statement given on the conference “Europe exposed”, House of European History, Brussels, 25-27 June 2018.

Recommended citation (the paragraphs are numbered in square brackets for citation purposes):