[1] „Enjoy digital life“ is the slogan of the pay-TV company StarTimes in Kenya. For the first time I noticed the slogan on the way to Lake Bogoria, where the flamingos eat cyanobacteria and thus get the pink color. The contrast between the contemporary saying and the walk down to the lake could not have been greater. 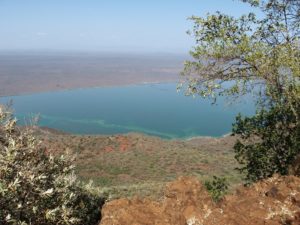 [2] 600 meters above the lake you get to a brim and look at the lake. With the naked eye, no flamingos can be seen from up here, and up here, there are no odors from the hot springs. The descent is difficult because of the heat, the paths are rarely used except for beekeepers, so you have to bend down again and again to crawl under the thorny branches. But all crawling does not help, at the end of the tour my forearms are scratched bloody as if I had participated in a religious flagellation ceremony.

[3] Beekeepers use a simple yet effective technique that nicely contrasts with the slogan „Enjoy digital life“. An approximately 1 meter long piece of a tree trunk with a diameter of about 25-35 centimeters is split with a knife-like tool in the middle by hand and a bit tedious. Then the two halves are hollowed out. At the two ends, passages for the wild bees are placed in and out of the cavity as access and exit. The two halves are held together by e.g. a nailed piece of sheet metal . The ‚beehive‘ is then placed approximately at eye level in the branches of a tree, at least out of the reach of animals. 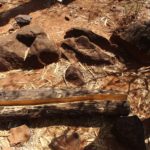 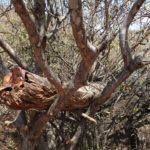 [4] The bees take on the housing, everything works like a usual beehive round here in central Europe.

[5] After all the effort in the heat, the bloody scratches and not always pleasant vapors, the further way to the other shore side, where the flamingos and other birds live, is covered with a jeep, so that the ‚reward‘ does not hesitate too long. At the beginning of February there are only a few thousand flamingos, the young still white, the old pink. The majority has moved on to another natron lake for breeding. The sound of the engine and the presence of the people bring unrest to the world of flamingos.

[6] The light of the late afternoon creates a wonderful play of colors with soft tones, the white and pink of the flamingos, the blue of the lake, and the many colors from the shore up into the steep slopes. 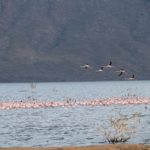 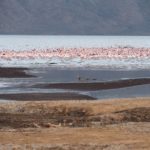 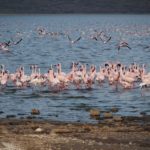 [7] The slogan „Enjoy digital life“ refers primarily to digital television, but it is quite representative of Kenya. Actually, everyone has his or her smartphone, which is used in particular for payment. And this for years – the „Stern online“ reported in 2015 about it and put out the edge of Kenya in this regard in front of European countries.

[8] On the very lonely and wild Teleki hut on Mount Kenya, the young guardian, without me asking him specifically, showed me the path that I would have to take if I wanted a net. And even the travel preparation, that is: visa, is in Kenya conceivable digital service-oriented: Simply enter on the appropriate government page all information electronically, print your eVisum and present it at the entry with the passport. No waiting times at the consulate in Vienna, no interposition of a company that has been commissioned to issue the visa.

[9] The digital progress in Kenya is also not an urban phenomenon, but also belongs to the countryside.

[10] Kenya made headlines in 2017 and 2016, as well as earlier with violent excesses on the occasion of elections. The inner-Kenyan political tensions and antagonisms were already apparent before independence (1963), but Kenya is a comparatively stable country and it is easy to travel and hike, at least in the western half of the West, which is interesting for tourism. In the east in the border area with Somalia, the al-Shabaab militias commit terror attacks again and again.

[11] The British colonial past is present everywhere, and it is not only past, but also present. The destruction of historical societies and economies in the territory of present-day Kenya by the colonialists took place relatively quickly between the end of the 19th century and the Second World War. Building something new, working well, takes much longer.

[12] To this day, the temptation is breaking ground to authoritatively consolidate the power once legally gained in elections and not to surrender. Ngũgĩ wa Thiong’o describes in the novel „Lord of the Crows“, which he originally wrote in Gĩkũyũ, in the context of the time of President Daniel arap Moi (President 1978-2002), who marched towards dictatorship, especially in the 1980s. The novel is absolutely worth reading.

[13] In today’s Kenya are sites of early or pithecanthropus. On the coast, which was already part of the trade network in Antiquity, developed in the Middle Ages a strong Arab-Muslim-influenced métissage culture, which is among other things the language Swahili to owe. Together with English, it is one of the nationwide languages. In Swahili you can recognize words from many languages, it is like a history book.

[14] Europeans who come to Kenya do not care of the injustice and violence of colonialism. For many, Kenya is more of an African yearning destination. A decisive role is played by the filming of the memories „Out of Africa“ by Karen Blixen with Meryl Streep. Or (in German-speaking countries) Bernhard Grzimek’s commitment to the Serengeti (Tanzania / Kenya).

[15] Those who do not travel to the coast for swimming usually come for the animals, which can easily be observed in the many national parks. Some also come for hiking and mountaineering, e.g. in the Aberdare Mountains and around Mount Kenya (both National Parks). The Abderdare Mountains reach up to 4,000 meters above sea level, Mount Kenya at the highest point 5,199 meters above sea level. It is the second highest mountain in Africa, but only tiny remnants of the original glacier have survived.

[16] We climb Point Lenana (4,985 meters above sea level). At 5 o’clock in the morning we are in the icy wind on the saddle, the sun begins to rise. The view is so clear that you can see Kilimanjaro in the distance. But the efforts of the ascent – cold, dust, steep paths – have paid off, the ascent of the summit is only a bonus of completeness. 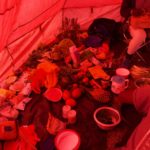 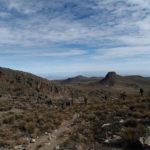 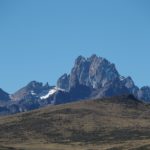 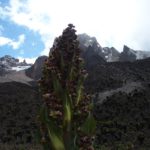 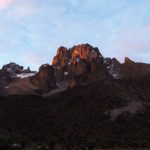 [17] On descent, the icy wind is gone at some point and the sun warms. As a souvenir I take for the next few days after thawing a swollen right half of my face and swollen feet and hands.

[18] As a reward, the Samburu National Park continues north, where herds of elephants, oryx, impala, monkeys and other animals cross the visitor’s path. In addition many giraffes and different birds, ostriches and the inevitable warthogs. Lions and leopards are rare, but Jeep riders are familiar with the National Park and know where to look to see them. There are no more rhinos here, for that you have to drive to the Nakuru National Park, which also offers buffalo herds.

[19] Although on a regular basis spectacular animal photographs are offered on television, the direct observation of the animals does not lose its charm at all, on the contrary. Although nothing spectacular happens and the animals only graze, secure and sometimes walk away, you can watch them for hours. This is best done with elephants and giraffes and you quickly get to know the individuality of the animals. 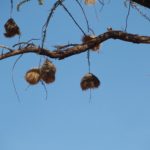 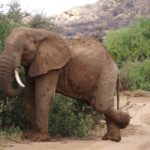 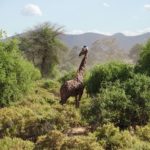 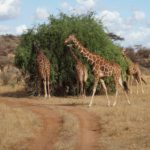 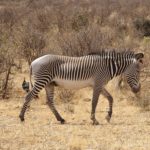 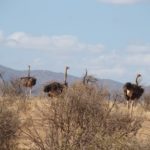 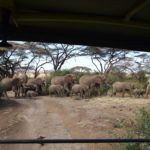 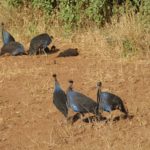 [20] Overland over in West Kenya means following a festival of colors. Along the street shops and workshops line up in the villages, which are colorfully painted, sometimes downright artistic. Others are built in light wood construction, the fruit and vegetable stands are made by the offer and sometimes the vendors colorful. The names of the boutiques are imaginative, often ‚mom anyway‘ or ‚paradise anyway‘ etc.

[21] While Islam reached Kenya via the coastal region as early as the Middle Ages, Christian confessions were introduced in the colonial era. Colonial times have always been a high time of Christian proselytizing. As before, the different churches shape the picture, along with mosques. As before, many schools are church institutions, but state and private have long since moved on. 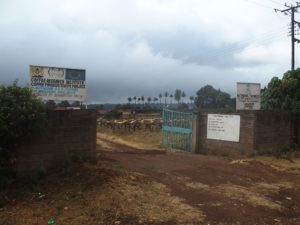 [22] From time to time you can see panels pointing to EU funding. The relations between the EU and the East African countries (Burundi, Kenya, Rwanda, Tanzania, Uganda) with which an economic agreement was concluded are ambivalent, because for the time being free trade regulations etc. are more used by companies in the EU than Kenyan companies. On the other hand, e.g. Kenya supplies the European flower market – huge flower plantations in greenhouses line the road from the north to Nairobi. Delmonte maintains extensive pineapple plantations, coffee and tea cultivation is just as little in the hands of small local farmers, to whom the local micro-economy remains as a livelihood. 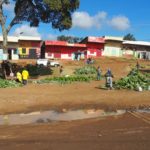 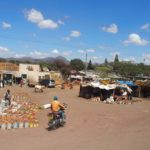 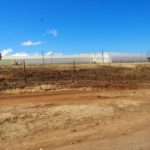 [23] You can enjoy the mountains, nature and wildlife in Kenya without being blind to the downsides. It’s also easy to talk to Kenyans. Most are reserved at first, but they do not stay that way.

[24] Kenya is synonymous with diversity, that’s how I feel. I was very happy in the country!

Information: Many tour operators offer travel with different focuses to Kenya. For Central Europeans, I can personally recommend the offer of the Graz travel provider Weltweitwandern.