A country with no human rights standards: Turkey

Human rights and democracy standards have never been fully respected in the history of Turkey. Yet, there has been a gradual and worrying increase in violations of fundamental rights and freedoms since July 2015. There were three incidents that led to vicious circle of violence resulting in grave human rights violations in the country. These incidents are; a) 20 July ISIS bombing attack, which killed 33 young people, in Suruc Sanliurfa, b) 22 July the murder of two police officers by unknown perpetrators in Ceylanpinar, Sanliurfa, and c) 24 July, Turkish army forces’ airstrikes operation against PKK camps in Northern Iraq, blocking more than 100 websites and arrest of dozens of people across the country.

At the end of the July 2015, the violence erupted in the South East region. Public authorities declared curfews in several districts of the region. As known, these curfews made destructive impacts on 1.6 million people and about 500.000 of them became internally displace people (IDP). Academics for Peace, an initiative of academics from different universities, launched a peace petition on 11 January 2016. The Peace Petition condemns human rights violations and demands accountability for these violations. In this period, two dates are very important to understand the substantial change in the country’s direction. 20 May 2016, the immunity of MPs was lifted. This incident resulted in the detention of 13 Peoples’ Democratic Party (HDP) including its co-chairs Mr. Selahattin Demirtas and Ms. Figen Yuksekdag. 8 June 2016, the impunity shield was provided to security officers who join operations in the region. The importance of these two dates is related to change in authorities’ mentality: more space for violence and military operations while limiting freedom of expression and shrinking public space. In this period, violence and human rights violations were affecting mainly the South East region though there were human rights violations such as environmental issues, professional accident, violence against women, violations against refugee etc. in other parts of Turkey. However, the whole country was under a threat for not respecting human rights and democracy principles. From July 2015 to July 2016, 1600 people including security officers, armed militants and civilians lost their lives in the armed conflict in the region. Only the traffic accident caused more deaths in this period. This increasing violence created, unfortunately, an atmosphere that some people who are interested in military regime thought it was time to stage a military coup. It is a consolation that the coup attempt failed on 15 July 2016.

The Government declared State of Emergency across the country on 20 July 2016. Now, grave human rights violations such as torture and ill-treatment, detention without due process, ban on freedom of assembly, and dismissals of public officers, appointment of trustees to municipality as well as private companies, closure of media outlets, companies and private universities. Thousands of people left the country and started to live in other countries. There are over 150 journalists in prison in Turkey. All forms of public gatherings are banned in metropolitan cities such as Ankara, Istanbul, İzmir, Diyarbakır, Mersin etc. If people take streets, they face police intervention. If they insist, as we see in the case of Nuriye Gülmen, Semih Özakça, they are arrested. There is no efficient check and balance system particularly after the referendum on 16 April 2017.

The higher level of violence caused deterioration of human rights standards with regard to freedom of expression and media, freedom of association and assembly etc. Of course, human rights defenders are not free from physical attacks and judicial harassment. 28 November 2015 is an important date to remember because Tahir Elci, a lawyer and prominent human rights defender, was murdered while protesting the impacts of violence on cultural heritage. Several activists of İnsan Hakları Dernegi/Human Rights Association (IHD) were arrested by security forces or even put into prison in this period. Several IHD executives, such as Vice-President, General Secretary and International Affairs Secretary, were banned from traveling to abroad. Similarly, dozens of them were dismissed from the public service by a decree law issued under the state of emergency.

From January 2013 to July 2015, there was a relatively peaceful atmosphere resulting from the Peace Talks between the Government and PKK Leader Abdullah Öcalan. There were less violations of fundamental rights such as right to life, torture and ill-treatment, freedom of association and assembly, freedom of thought and expression etc. The solution can be found where the problem starts in this case: ending the Peace Process in Turkey. The way to exit from this vicious circle is clear: more space for human rights and democracy principles. 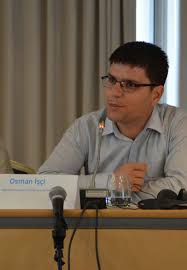 Osman İşçi has been a research assistant at the English Language and Literature Department of Hacettepe University in Ankara, Turkey. Due to the non-respect of laws under the State of Emergency, he recently has been dismissed from this position. He is currently writing his PhD dissertation on the troubles in Northern Ireland, entitled “The Troubles of Northern Ireland: Representation of Violence in Seamus Heaney and Michael Longley’s Poems”. He is the International Affairs Secretary of the Human Rights Association and has been banned from travelling abroad. He is member of the Executive Committee of the Euro-Mediterranean Human Rights Network (EuroMed Rights). His recent publications include The State’s Current Policy towards Human Rights Defenders: Criminalisation of Human Rights Defenders (2013) and Mission Report on the Protest Movement in Turkey and Its Repression (2014). He has contributed to “Human Rights Leagues in Europe, 1898-2016” ed. by Wolfgang Schmale and Christopher Treiblmayr (Stuttgart 2017).